First of all, Happy Father's Day to all the males of the species that have been able to pass on their genetic material and produce offspring! Kudos. If you're a male black widow spider, well, this day might also be your funeral, but I digress.

Since it's Father's Day, we spent the afternoon with my parents over a late lunch. My parents got there before the missus and I. When we got there, my dad introduced us to his friend that was by chance celebrating Father's Day with his family in the same restaurant. We said hello, exchanged polite smiles and sat at our table. Later, they stopped at our table on their way out and we were introduced to the rest of the group. My father introduced me to his friend's son, Mark. As we were shaking hands, my mother said 'Mark is with Rivermaya'. The statement caught me by surprise and the only response that I was able to put together was 'Talaga?' (Really?). He smiled 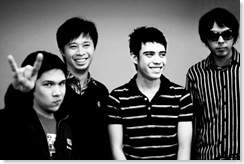 back at me and I was embarrassed for myself. This was Mark Escueta. Although I'm no fanboy, I love Rivermaya's music and have been listening to them for more than a decade. They are definitely on the list of best and most respected groups the Philippines has ever spawned. The family were all nice and we waved goodbye as they left.

I have a few Rivermaya moments in my life, but I think that takes the cake. Let's countdown the other top 3:

Maya Moment #3: There was a week when I couldn't get one of their songs out of my head, You'll be Safe Here. I didn't have a copy of the album where the song was featured so I decided to ask one of my co-workers, who was a known Rivermaya fan, if she had a copy I could borrow. When I went up to her, she was chatting with a friend. I asked her if she had a copy of Rivermaya's latest album. She said she knows someone who does and asked if I was looking for a particular song. I said yeah, You'll be Safe Here. She and her friend looked at each other and giggled, 'That's been out around a year now and they 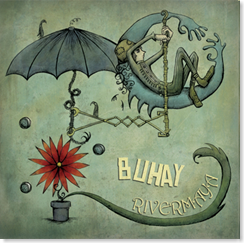 have a new album'. I suddenly felt old and very un-cool. I know, petty and trivial.

Maya Moment #2: I have blogged about my singing abilities before, the gist of it is I have no talent for it and the world would be better off if I avoid it altogether. But there was one time that I was singing and the missus turned to me and said 'that actually wasn't all that bad'. That's probably the best compliment I'm ever going to get. I only sang a portion of it and quit while I was ahead. The song was Rivermaya's Bring Me Down.

Maya Moment #1: I played guitar back in high school. I never got good at it. I could never tune my guitar without an electronic tuner. I did get to a point where I could play the basic chords, and with a lot of practice, I might learn a whole song. There were people in our  batch that were good and could play songs by ear.

I, on the other hand, needed chords from Songhits or a similar magazine to be able to play. A group of them sometimes got together to jam during weekends. During our senior year, they were asked to perform at the last event for the seniors before graduation. They needed another person to play on guitar, for no other reason other than we were friends and I had the right equipment, they asked me to join. They certainly didn't asked me because of my talent. It was fun jamming with them and eventually playing in front of the batch. I sucked of course, but I had fun. One of the songs we played was Kisapmata by Rivermaya. One of the coolest things I have ever done.

How disturbing is it that I'm #4 in these search results. Well, good luck whoever you are. I hope you found what you were looking for. Be careful though, it is Friday the 13th, you never know what you're gonna get....uhm, like a box of chocolates....a male box of chocolates.

brainfart by echu dealt at 11:15 AM No comments: