Here’s an article which I found through a friend. It’s about the poll automation this coming 2010 elections in the Philippines. Maybe it’s just me, but I found this article hilarious.

MANILA, Philippines – A voting machine short-circuited and emitted smoke during testing at the Commission on Elections (Comelec) on Thursday.

A representative for the lone bidder for the P11-billion election automation project, the Smartmatic-Total Information Management consortium, said the wrong cable was mistakenly used to plug the machine to an electrical outlet.

The precinct count optical scan (PCOS) machine shut down automatically after it short-circuited, protecting the machine from tampering, said Smartmatic-TIM. It also did not accept test ballots that were being fed to it.

Now, it would have been fine if the article ended there. It was their big day and they screwed-up. They could have just gone “Frak. Very anti-climactic. Not exactly putting our best foot forward. Let’s all go home and come back tomorrow with a new machine and the right cable and try this again. Let’s not embarrass ourselves a second time. They’ve got media people around for heaven sakes.” But no, that’s not what they did. Being from Smartmatic they had to be smart and save the day. So, the article continues:

“The machines will guard itself from the tampering once its features are tampered, in this case the power source,” the Smartmatic representative said.

And there you go. I’m sure Mr. Representative was very proud of himself. ‘I saved the day, hooray for me’. Thank you Mr. Representative. It’s very comforting to know that the voting machines that will determine our next president can guard itself against tampering the same way a microwave oven or desk lamp can protect itself – fry its circuits. Good save, dear sir. Someone give this man a raise, he just saved the company some bad press.

But it’s not over. It gets better. Apparently someone bought the bridge he was selling. The article goes on to finish with this gold nugget:

The “unintentional demonstration” of the security feature was “very helpful,” said Ferdinand Rafanan, chairman of the Comelec’s Special Bids and Awards Committee.

Very helpful indeed. Well, there you go. Looks like the 2010 presidential elections is in good hands. My faith in the Philippine election system is renewed. I’ll sleep soundly tonight.

Kudos to the writer for the subtle humor. Good stuff. And I’m being sincere this time, you know, unlike the previous hundred words. 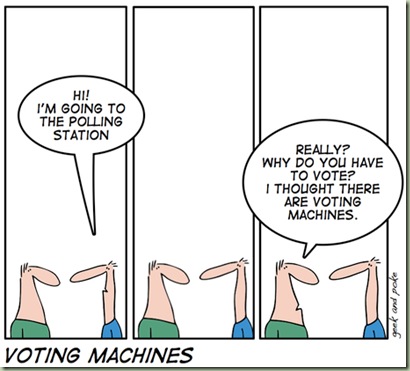 So when I was thinking about blogging this, I wanted to find other news sources on the incident. Guess what? One article on the same news item has the headline “Smartmatic passes demo with flying colors”. It was the same event. Both articles were written on the same day. *shrug*. I guess disaster and/or success is also in the eyes of the beholder.

Philstar.com has an article with more details on the demo, you can read the full article here. Headline reads “Smartmatic hurdles initial tests”, which is somewhere in the middle of the two previously mentioned articles. It doesn’t mention the fried circuits, but there are some interesting things in there too. Here’s some excerpts:

“Everything is smooth. So far in the 26 criteria, the machines passed six of them,” Rafanan told reporters.

But during the demonstration, Rafanan announced that electronic devices like cellular phones would be banned at the bidding room starting today because they could interfere with the transmission process. His announcement raised a howl of protest from the media and other observers.

Why would the reporters “howl”? Do they expect these tests to simulate ‘real world’ scenarios? That’s not what these tests are meant to do. Shame on you, you sensible logical thinking reporters you. Sense never did anyone any good. Remember that kid? What did his sense ever do for him? “I see dead people”, that’s what. No one wants that.

He noted that they wanted to be strict on electronic devices because “electronic interference” could ruin the preparations that they have been making to automate next year’s polls.

To which Mr. Rafanan later added “so don’t mess up our preparations. Besides, what kind of electric devices could people conceivably bring with them during the elections? You don’t expect them to come with their TV sets or audio systems strapped to their backs do you? You crazy reporters.”

Rafanan added that security against possible “electronic interference” is not included in the 26 criteria to be checked by SBAC.

When Mr. Rafanan was asked to elaborate, he responded with “we don’t test for that stuff. Besides, to ensure that the equipment does not suffer from electronic interferences, on election day voters will be asked to disrobe, wear a biohazard suits, and enter a hermetically sealed environment. The entire room will be surrounded by copper mesh that will absorb all radio interference. We will also have snipers ready to go. Why snipers you ask? So that you don’t try anything funny, some people might still try to sneak in their TVs sets. Plus snipers are cool. Don’t you want a cool election? An exercise of democracy doesn’t have to be boring you know. Plus it’ll draw the younger voters. How do you feel now you howling observers? I bet you feel stupid. 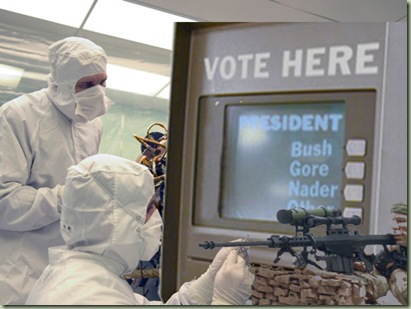 I don’t know about everyone else. But these people scare people. People who won the contract and the people on the government side. Based on these articles alone, they’re not exactly beaming with competence are they? Plus reports of irregularities don’t exactly help:

This developed as losing bidders started to question the credibility of Smartmatic/TIM consortium after it submitted an “outrageously low bid” even if it would only farm out to subcontractors in Taiwan the manufacture of the vote-counting machines it offered the Comelec.

…what could probably compromise the integrity of the 2010 national polls is the fact that Taiwan, which has been conducting its national polls manually, has not tested the strength and reliability of the PCOs being offered by Smartmatic/TIM.

In 2006, Smartmatic had also been the focus of federal investigation, one by the powerful Committee on Foreign Investment in the US and another by the US Justice Department, for security reasons arising for its acquisition of a US voting-machine company in 2005, for allegedly paying bribes to win the Venezuelan election contract a year earlier and for alleged tax evasion.

Here’s another one, which also mentions that ‘security feature’ demonstration:

MANILA, Philippines – The chair of the Commission on Elections (Comelec) Special Bid and Awards Committee (SBAC) on Friday categorically denied that he received a P2-million bribe from Smartmatic, the lone qualifier in the race to bag the P11.2 poll automation contract.


SBAC chief Ferdinand Rafanan cried foul and called his critics "liars" for accusing him of receiving a bribe, according to a report on Friday by Tina Panganiban-Perez of GMA News.

"I deny that categorically. I never received anything. I'm ready to face them anywhere, anytime. They are liars. They should come out," Rafanan said.

Both Rafanan and Smarmatic officials explained to Locsin that faulty wirings caused their machines to bog down. They said the reason behind the glitch was a mismatch of in the wires used to connect the machine to the battery.

There you go folks. Looks like Mr. Rafanan can afford to buy the bridge after all, with a little help from his friends. Of course, these are yet to be substantiated. But it looks like it’s going to be a normal election year. Strap in and enjoy the ride folks.