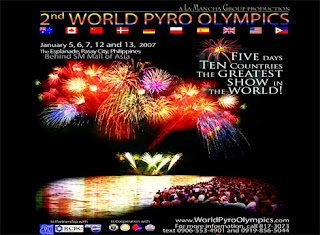 Well there are a few things to blog about, but first of - I WANT ONE!

The missus and I went to see the World Pyro Olympics last Sunday. Apparently, thousands of people had the same idea. Families on jeeps, pick-up trucks, vans, motorbikes, and on foot. When I say families on motorbikes, I don’t mean Mom, Dad, Ate, and Kuya had their own individual motorbike. They would be in one two-seater bike with the kids usually squeezed in between Dad who's driving and Mom who's clinging for dear life in the rear. Looking from the back, you would only know there's a kid between them because their arms would be sticking out. 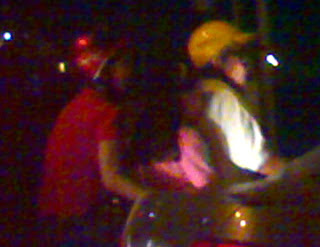 Apparently this is the standard configuration for putting a whole family in a bike. The fireworks were magnificent. According to the website, Sunday's show was the United Kingdom and Germany. I loved the second set, which was apparently Germany. And as always during these shows, there were a lot of collective ooohhhs and aaahhhs. We didn't make it all the way to the back of SM Mall of Asia where they were setup. We stopped when we got to Blue Wave cause there were just too many cars, motorbikes, and people trying to get there and the Blue Wave area was near enough to enjoy the show.

Tuesday night, I was still at the office, working tirelessly and diligently late into the night (in case people who think that might be an important detail), when I got a text message from a friend. They were in Libis and asked if I could join them. I haven’t seen the guys for a while so of course I went. Would Batman ignore the Bat Signal? I think not. The only difference is Batman doesn’t have to ask permission from Batwoman, if you know what I mean. 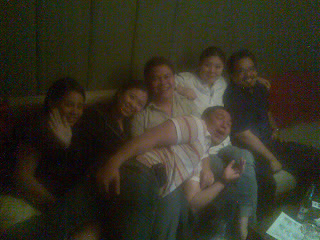 And so we got together. Including a friend I haven't seen in years. And we’re meeting a few weeks before she gets married. Another one down. She’s very happy to be getting married and we were happy for her. Especially since we got a free dinner out of it and will be getting one again on the wedding day :P Congratulations Kends! May you have a long and happy marriage :) After dinner, we went to a KTV (apparently there are wholesome ones as well) and there we sang the anthem - Gold by Spandau Ballet. This we always sing (or mostly yell in my case) with fervor, popping throat veins and everything. Yes, baduy. But if you've checked in here more than a few times, you would have already figured that out. It was just fun to be around the guys. Many things to catch up on: people in love, broken hearted, and some apparently have new pets. Of course, there are many others missing from the bunch, but it's been awhile since I've been with this number of the old guys. Come to think of it, some of us have known each other for 10 years now.
brainfart by echu dealt at 5:26 AM